There’s a reason people are drawing parallels between Bitcoin today and the internet in its early days. Both are massively powerful tools that are profoundly changing the world. And Bitcoin’s transformative potential is multiplied when you apply it to virtual worlds.

Bitcoin is a tool that completely changes the possibilities for virtual economies. At ZEBEDEE, we’re using it to unlock a revolution in gaming. We’ve built both the infrastructure that developers need to integrate real-time Bitcoin transactions into their games and the tools gamers need to interact with the system.

How do I join the Bitcoin gaming revolution?

If you’re a game developer, apply for access to the ZBD Developer Dashboard and start adding Bitcoin into your games. Or read our blog and learn how to develop your own mobile game.

If you’re a gamer, it’s even more simple:

OK, so that may have been a bit of an over-simplification… but if you read through the rest of this article, you'll find a rundown of the ZEBEDEE Bitcoin gaming ecosystem and what it has to offer both gamers and game devs.

The ZEBEDEE ecosystem supports anything from playing CS:GO for Bitcoin, to casual mobile games to streamers collecting donations while they’re live, to developers making brand new game mechanics that weren’t possible before.

ZEBEDEE – Your portal into Bitcoin gaming

The ZEBEDEE app is basically everything you need to start playing games for Bitcoin, participating in Bitcoin-powered esports events or collecting Bitcoin tips on your live streams. But one thing at a time.

Before you read all about it, maybe you’d like to install ZEBEDEE and take it for a spin yourself?

What is the ZEBEDEE app?

At its core, ZEBEDEE is an app with an integrated custodial Bitcoin wallet much like any other – it allows you to send and receive Bitcoin instantly by using the Lightning Network. But that’s just the underlying mechanics of how it works. What sets our Wallet apart is that we’ve built it specifically for gamers and streamers.

You don’t need to be a Bitcoin enthusiast to use our app. We’ve designed it to be intuitive and simple to use even if you don’t know the first thing about crypto. Here’s a few cool things you can do with the ZEBEDEE:

Want to learn more about the ZEBEDEE app? We got you covered.

Your ZEBEDEE Gamertag is sort of like your username in the ZEBEDEE ecosystem. You set up your Gamertag when you first install our wallet. From that point forward, receiving Bitcoin payments becomes as simple as sharing a QR code.

The Gamertag allows you to easily receive direct payments straight into your ZBD Wallet. Other ZEBEDEE users can find you from a list of users in the wallet itself, but the real beauty of the Gamertag is that it comes with a static Bitcoin address. This means you can share your address in the form of a QR code and place it anywhere online for people to send you Bitcoin!

A static address is like your bank account number, but much more simple to use, since it works with standard QR codes compatible with any Bitcoin Lightning wallet. You can save it, share it, print it or paste it anywhere you want. This is how streamers use ZEBEDEE to collect instant donations without third-party processor fees – they just overlay the static QR code on their stream! Literally no other setup needed.

And what's more, your Gamertag QR code isn't just for collecting payments, it lets people request Bitcoin from your as well! Welcome to the metaverse (v0.1).

Along with your Gamertag, you get a public page at zbd.gg that displays your address and a message you can set in the wallet. It will look like this zbd.gg/YOURGAMERTAG. Check out this one, which we've set up for collecting donations for Bitcoin developers: https://zbd.gg/btcdevdonations.

It’s really a very simple concept. But we couldn’t just leave it at that, so we included a dynamic component into the otherwise static QR codes, so you can tweak various little things. You can use the ZBD Wallet to change what’s the minimum payment amount you accept and modify the message people get when they send you some Bitcoin. This will not change your address or QR code though!

To play games for Bitcoin, you first need Bitcoin-powered games

Here we come to the gist of our whole operation. It’s all well and good having a wallet that is specialized for gamers, but you still need Bitcoin-powered games to use it with. At the very core of the ZEBEDEE ecosystem is a way to put Bitcoin into any game.

We created ZEBEDEE to revolutionize gaming by giving developers the tools they need to give in-game currencies, actions and scores actual real-world value. Everything we’ve built are essentially the tools to get this job done. But because this is all extremely new technology, which at first glance seems complex and abstract, we’ve created a showcase of the power of ZEBEDEE by integrating Bitcoin into the most popular multiplayer games today. We call this solution ZBD Infuse.

Our team has been making Bitcoin games since 2013. Along the way, we’ve learned one thing: the problem isn’t finding awesome ways to put Bitcoin in games, it’s how to make games people actually want to play. The gaming space is extremely competitive, and it’s not exactly easy to just go out and create the next CS:GO and get millions of people to play it. Luckily, we don’t have to.

To demonstrate ZEBEDEE in action and showcase what’s possible in Bitcoin gaming, we’ve developed Infuse. Infuse is a desktop app that brings Bitcoin to existing games people already know and love. We take data from a game via API, do a little magic and voila, we get a game that’s upgraded with real-time Bitcoin transactions. This could be anything from giving your score a value in Satoshis, rewarding you for clever plays or penalizing you if you shoot your teammates.

To start off, we’ve put instant Bitcoin transactions into one of the most popular multiplayer games out there: Counter Strike: Global Offensive. Our implementation works like this: When you join a server that has been “infused”, you need to pay an entry fee (this is easily done with our wallet). The fees from all entrants are collected and added to the total prize pool. If you play well, you’ll get a bigger portion of the prize, based on your score. Since Lightning transactions are so fast, you don’t have to wait until the end of the game for all scores to be tallied up: you can quit the match whenever you want and immediately withdraw your earnings up to that point.

When you connect in-game score with a currency that has value in the real world (and you can withdraw at any time), the stakes suddenly get a lot higher. Earning money by playing games is great, but, from our perspective, that’s not even the main point. The point is to have skin in the game. Because winning or losing money in real-time as a direct consequence of how well you’re playing takes the passion and drive of competitive gaming to a whole new level.

While Infuse is a great new way to spice up existing games, it’s basically just an overlay and doesn’t dig much deeper than the surface level of the game. To really take advantage of the possibilities unlocked by ZEBEDEE, developers can implement Bitcoin into games at a core level, as a part of essential game mechanics. This is where our Developer Dashboard comes into play.

The ZBD Developer Dashboard gives game developers a powerful tool for fusing game mechanics with Bitcoin. Through our API and SDKs, game developers can connect Bitcoin transactions with in-game actions, which opens the door to a lot of innovation and new approaches.

With Bitcoin in your game, the points you collect by playing suddenly start to matter a lot more. Withdraw them from the game, use them to tip your favorite streamer or even transfer them to another game. Or use them to buy a car if you’ve accumulated that kind of dough! This is a very strong incentive for users to not just try a game, but stick around.

However, it’s not just about replacing the points you earn within the game with an outside currency. What ZEBEDEE is all about is unlocking innovation by enabling new and creative ways to use payments in games. Here’s a taste of what we mean by that:

And much more, the possibilities are only limited by your imagination (and game development skills).

The gaming community doesn’t end when you quit a game – actually that’s only the start of the community part. That’s why we’re bringing Bitcoin to all parts of gaming, including some of the most popular chat tools out there: Discord and Telegram.

We’ve built bots that let you transfer Bitcoin easily while chatting. You can send Bitcoin to any user, tip an awesome comment or reward a hilarious meme – all with the money you’ve just earned in your favorite game.

The bots are as simple and intuitive as sending an emote, except even cooler, since you have real value at the tip of your fingers! With Bitcoin in your chat, you can make community points actually matter!

The magic of the ZEBEDEE ecosystem comes from the Lightning Network, a fast and scalable network built on top of Bitcoin where transactions are almost instant and come with virtually no fees (seriously, Lightning fees are tiny). While transactions on the main Bitcoin network can be too expensive and not fast enough to support the kind of micropayments we wanted to add to games, the Lightning Network gives us an instant and practically free way to move money. More importantly, the digital nature of Bitcoin makes it programmable – it’s money you can program to respond to in-game actions or events. And that’s the real magic behind ZEBEDEE.

By building the ZEBEDEE ecosystem on top of the Bitcoin Lightning Network, we can give developers a powerful tool for inventing brand new game mechanics, while at the same time connecting the points you earn in-game with a real-world global payment network. The Bitcoin that lands in your wallet is instantly yours and you can do whatever you want with it. This is inherently different from platforms like Twitch, where you don’t get paid out until you break a certain threshold, or payment service providers like PayPal that charge significant fees and can easily block your withdrawals.

At the end of the day, it’s not really about Bitcoin, it’s about new ways of moving value in games. Bitcoin and its Lightning Network just happen to be the best tools for the job. 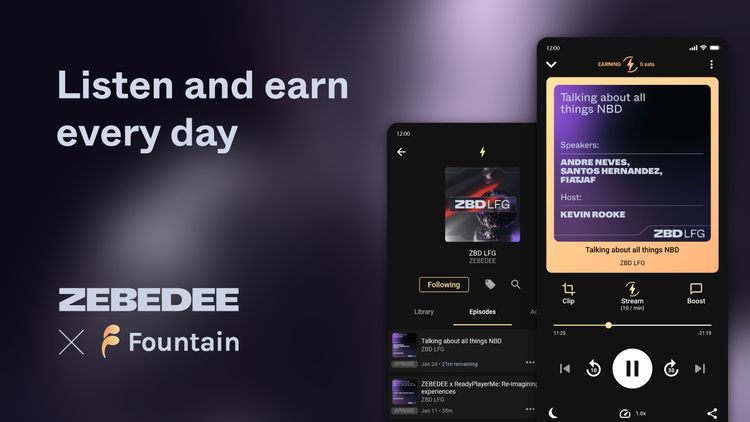 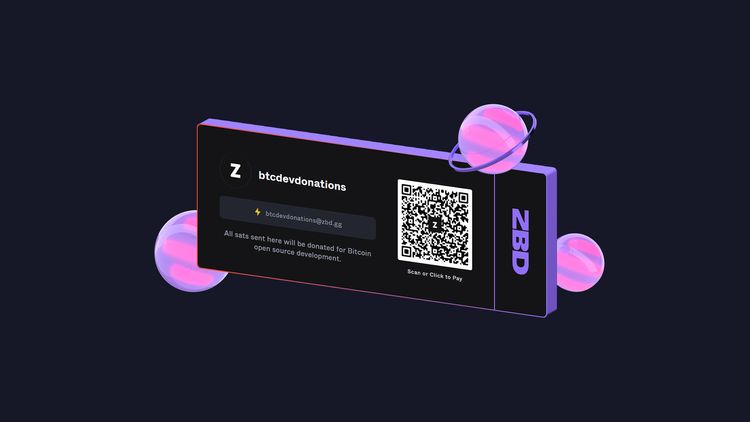